With the Title, you must be thinking that I am going to tell you a story about some Woman or girl in trouble. But I am not!! Now I am not a feminist, especially after seeing girl-next-door (Here!! I am not talking about the movie).

The title reminded me about the Malgudi’s Man-eater. So I will try to frame the short story in next paragraph according to that story only.

Once upon a time, there was an old person, who was on his dead-bed because of cancer by excessive smoking (apparently this person was from OOTY). He was watching a news channel on TV with his 10-15 grand children. Then suddenly a news flash comes on the TV, in which they were showing a guy who troubled his wife and become famous as WIFE BEATER.

The old person tells to his grand children that he knows this WIFE BEATER and also lived with him. One of the Grand children asked, “Was he really a WIFE BEATER??”. Old fellow told them that when this guy used to get drunk, he used to treat him like his wife and so he knows what all brutalities he would have done on his wife!! Grand Children praised the bravery of this Grand Father, who showed courage to stay with him that also as a wife, as this WIFE BEATER used to drunken alternative day. Some people also used to call him as “Drunken bastard”.

On 6th February, This WIFE BEATER celebrated his anniversary. All his friends came with cakes and gifted him with all the weapons by which he can beat his wife one day.

This day will always be known as the WIFE BEATER DAY in history, when this “drunken bastard” born!!!

Friend tribute this legend and wish him a long Wife Beating Life in this Blog! 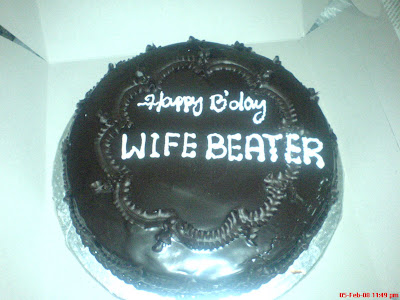 A Cake for the WIFE BEATER

PS: This article is for NITK 2007 batch junta only. Other may have difficulties in relating the context with factual life. In case of any query or comment, please comment in this blog only.