A Lesson from Earth’s Most Powerful Mammal

I found this Blog when I was browsing net! It is really a nice article and we all should learn something out of this!

Thanks and Regards,
Sumeet Sahu

A couple of months ago I went to Thailand with my girl friend to watch and ride on the elephants there. Watching these world’s largest mammals are really fascinating. Elephants are such gentle creatures and yet so powerful and strong. A large male elephant has the strength to pull a tree down and is able to lift a log with his trunk. 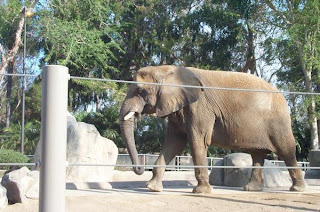 One thing that amazed me is that there are no elephant cages. You have cages for lions, bears and tigers but never a cage for the elephant. Why is this so? How do they prevent this powerful creature (stronger than the tiger + lion + bear added together) from escaping and running away. All they do is to tie a rope (or a single chain) to the elephants leg and secure it to a stake in the ground. Once his leg is secured, he will not run away. Now, do you think the elephant actually has the potential to break the chain or rope if he wanted to? Of course! He can pull down an entire tree!

But why won’t he break the weak rope that holds secures his leg?The answer I found from the keepers lies in making the elephant BELIEVE that he CANNOT break the string. This conditioning begins from young. When the elephant is a baby and still too weak to walk or even stand properly, they tie his leg to the stake in the ground. Sure enough when the baby elephant tries to run to its mother, it would not able to break the chains that bind it. When it attempts to run, the chain will catch its leg and it will fall onto the ground. Undeterred, the elephant would get up and ‘try again. He will run towards his mother only to have his leg get caught and body being flung to the ground. After expriencing all the pain from falling again and again, one day the elephant will not bother to pull the chain any more. The moment this happens, the keepers know that the elephant has been condiitoned to be trapped for the rest of its life.
Why do I tell you this story? When I watched this powerful creature being secured by a weak chain that it could easily break but does not, I think of the thousands of people whom I meet every day who are similary trapped by their limiting beliefs and habits that they can easily change but do not even attempt to. As human beings, we are like that powerful elephant with tremendous potential to achieve any dream we want, from becoming a millioniare to making a difference in the world. However, so many people with this amazing power do not dare to take action becasue they believe they cannot do it. They believe that it is pointless.
It could be when they were young, they failed and fell many times just like that baby elephant. Maybe when they were young, their parente stold them they were lazy and stupid. Maybe their friends called them a blur sotong. Maybe, their teachers said that they were good for nothing. As a result of all this past conditioning. may people form the belief that they cannot succeed. Just like the elephant, they think that I could not do it in past, so how can I do it now? In the past, I was lazy, so how can I be hardworking now. In the past I had no confidence, so how can I be confident now. In the past I was a slow learner, so how can I learn fast now? In the past I could not speak well, how can I now?
What these people fail to see is that the past does not equal to the future. They do not realize that just like the elephant, they are not the same person anymore. The elephant does not realze that in the past, he did not have the strength and power, but he does now. I want you to now that every single day, you wake up a different person. A person who has more knowledge, more experiences and a person who is wiser. Did you know that millions of cells in your body die every day and that new ones are produced?
In fact, Radioactive isotope studies prove beyond a shadow of doubt that you replace 98% of all the atoms in your body in less than one year. You make a new liver every 6 weeks, a new skin once a month, a new stomach lining every 5 days, a new skeleton – it seems so hard and solid, but the skeleton you have now you didn’t have three months ago. Even the brain cells that you think with as carbon, hydrogen, nitrogen and oxygen, as those basic elements, they weren’t there one year ago. So, the only thing that keeps us from changing our actions and our results are the beliefs that we have.
If you have been allow the old beliefs and habits of the past to chan you back, isn’t it time you used your power to break free from prison of mediocrity and move towards the freedom, success and wealth you truly deserve?